The IsoAcoustics Aperta 300 takes the isolation stand design that’s been such a hit here at Sweetwater and tailors it to larger studio monitors. This sculpted-aluminum stand suspends your monitor speaker in such a way as to essentially remove your desk and other monitor hardware from the sonic equation, delivering a more transparent sound than you’ll get from a conventional stand. A threaded cap dials in your optimal tilt angle.

When you place your studio monitors directly on a desk or mixing console, sound reflects off the surface and arrives at your ears just slightly after the direct sound, reducing the accuracy of your monitoring. And who wants to listen to their studio rattle around while they’re trying to work? The IsoAcoustics Aperta 300 isolation stand allows your monitor to “float” in free space, providing you with accurate, uncolored sound.

Get superior isolation and serious style with an IsoAcoustics Aperta 300 isolation stand! 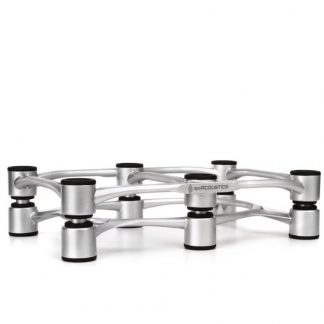