JBL’s M2 Master Reference Monitor System lets you easily integrate the “big” monitoring experience into your studio. When it comes to hearing what you’re doing, there’s no substitute for “main” monitors. As small- and medium-sized rooms play an increasingly important role in content creation, accuracy and robust dynamic range are required from a speaker system with a modest footprint. A 2-way, floor-standing or soffit-mount speaker system with Crown IT5000HD amplification, the M2 delivers unrivaled performance and a jaw-dropping listening experience. Call your Sweetwater Sales Engineer and find out what JBL’s M2 can do for you.

Maximum accuracy and dynamic range in small- and mid-sized rooms

We create in a mobile world where purpose-built control rooms are increasingly rare. When you need maximum accuracy and dynamic range in a small- or mid-sized room, yesterday’s monitor designs just don’t cut it. Enter the M2. For their M2 Master Reference Monitor System, JBL’s design engineers re-imagined the studio “main monitor” for today’s music, cinema, and broadcast content creation studios. They invented new high-output, ultra-low distortion transducers and integrated them into a system that delivers a staggering 20Hz to 40kHz frequency response and a stunning 123dB maximum SPL, all in a trim cabinet that’s equally at home floor-standing or soffit-mounted.

If you’ve ever heard a loud playback on the “bigs” (main monitors) in a world-class studio, it’s a revelation. For the uninitiated, your first reaction is one of being overwhelmed. After you’ve caught your breath, the first thing you marvel at is the incredibly tight and deep bass. You feel the crush of a well-recorded kick drum, the sheer magnitude of a monster synth bass. To record frequencies this low, you have to be able to hear them. With the JBL M2 Master Reference Monitor System, you can. The 2216Nd low-frequency driver in the M2 is no off-the-shelf woofer. Designed from the ground up, it employs five patented JBL technologies to allow bass extension to the limits of the audible range, as well as high output that’s free of the power compression that can compromise a system’s low-frequency performance. The 2216Nd employs dual neodymium magnets and two voice coils, and in a patented application, JBL even used special wire in its voice coils to ensure optimal performance.

Crown I-Tech 5000HD power amplifiers complete the M2 system, providing more than a kilowatt of pristine power to the M2’s 2216Nd woofer and more than enough power for the D2 compression driver. Working with the M2’s innovative Image Control Waveguide, the BSS Omnidrive HD digital signal processing in the Crown I-Tech allows for an ideal crossover, while giving you the option to store EQ presets.

Instead of the spectral smoothing used by some manufacturers, which conceals data, JBL’s Linear Spatial Reference (LSR) goes beyond simple on-axis frequency response measurements. It actually exposes flaws in speaker systems such as resonances, inadequate dispersion, and other causes of off-axis coloration. LSR enables JBL to define the ultimate performance spec for a new system (i.e., what it will sound like in your room).

JBL’s M2 enclosure is made of rigid 1″ MDF and is extensively braced for absolute stability at the system’s full-rated power. The enclosure employs the patented JBL Slipstream port design with internal flares that give you low-frequency efficiency while eliminating port-turbulence noise. The elegant M2 enclosure takes up relatively little real estate in your studio and may be transported to other working environments as needed.

JBL and studio monitors are just about synonymous, aren’t they? In the history of studio monitors, the name James B. Lansing looms large. In the mid 1940s, Lansing did the engineering groundwork for the Altec Lansing 604 coaxial monitor. This design remained the industry standard in U.S. recording studios through the 1950s and ’60s. In 1946, James left the company he cofounded and launched JBL, which in the late ’60s came out with the 4320: a main monitor developed in collaboration with Capitol Records in Hollywood. The 4320 and 4310 (the first “nearfield” monitor) put JBL at the forefront of studio monitor technology, and they have remained there to this day.

Hear it on “the bigs” with JBL’s M2 Master Reference Monitor System! 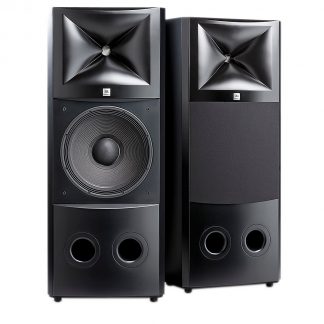