Engineers are always on the prowl for that special piece of gear. The game-changer. The one that will take their projects over the top. Combining an audiophile-grade monitor controller with eight channels of Dangerous Music’s renowned analog summing, the D-BOX will provide you with that elusive pro-quality sound you’ve been striving for. Reference-grade D/A converters ensure that you’ll hear every nuance of your mix, while the stunning analog summing mixer injects your mixes with exceptional headroom and dimensionality. You also get pro-studio essentials like switchable analog inputs, two powerful headphone amplifiers, and a built-in talkback mic. The D-BOX belongs at the center of your studio.

At Sweetwater, we like to say, “if you can’t hear it, you can’t mix it.” That’s why we love the D-BOX. Whether you’re placing a mic, tweaking an EQ, or preparing a final master, you’ll hear EVERYTHING. Developed by legendary designer Chris Muth, the D-BOX’s world-class circuitry incorporates audiophile-grade components and reference-grade D/A converters. This no-compromise design yields crystal-clear audio fidelity and flawless performance across the D-BOX’s entire feature set.

Pump up your mix with analog summing

When you bring up Dangerous Audio, the first thing that pops into most people’s minds is analog summing. After all, they invented the standalone analog summing mixer in 1999 with their groundbreaking 2-BUS. The D-BOX features eight channels of this acclaimed summing, and it will bring new levels of headroom, dimensionality, and clarity to your mixes. Your panning becomes more precise. Reverbs and delays become more engaging. Bass becomes punchier, mids more detailed, and highs more open. If you’ve been struggling with collapsing mixes, stop — get a D-BOX. Your troubles will cease.

The D-BOX features a main stereo analog input, two digital inputs, and two speaker outputs. It tackles both professional (+4dBu) balanced inputs and consumer (-10dBV) inputs like a champ. It provides you with a built-in talkback mic and a pair of 20-watt/channel headphone amplifiers. Switch between inputs effortlessly for instantaneous audio referencing, and toggle between two sets of studio monitors for another reality check. Thanks to its powerful routing capabilities, the D-BOX makes an ideal centerpiece for your studio.

What the pros are saying about the D-BOX:

Be the first to review “Dangerous Music D-BOX” Cancel reply 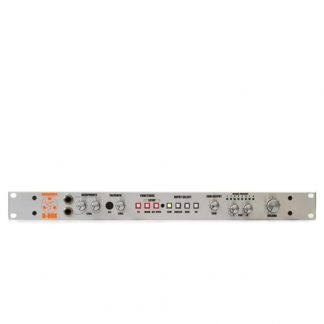